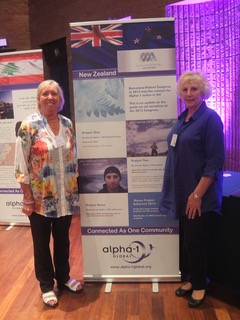 Welcome to the bottom of the world and the Alpha-1 Association New Zealand group. In New Zealand we do not have an individual leader but have co-leaders. At present this is Marilyn Black and Jim Clarke. Jim, who is not an Alpha, is authoring this article and will tell his story later.

To begin with, a little bit about the support group, which was established in 1994. Our first co-leaders were Pat Caulley and Andrea Needham who sadly both passed away in 2008. At this time the group could be contacted via a web page through the New Zealand Organisation for Rare Diseases. For the next five years the group remained relatively inactive. The emergence of today’s group began in 2013 under the co-leadership of Marilyn Black and Val Orchard, my partner, and this has seen the group grow from a few dozen to 128 members. You need to remember that New Zealand only has a population of just over 4 million.

(Pictured above:  Val and Marilyn at the Alpha-1 Global Congress in Barga, Italy)

Marilyn and Val first hit the global scene at the Barcelona Conference in 2013 and this gave them great impetus to do greater things for New Zealand Alphas. It was also at the conference in group discussion, that Marilyn and Val resolved for the organisation to have co-leaders; they did not want to risk the group folding as it nearly did when Pat passed away. Additionally, they recognized their complimentary skills and strengths, the importance of the group for the Alpha community and recruited others into the group and their families for the various projects that followed.

Their teamwork is fully illustrated by their creation and publication of the New Zealand Alpha-1 Pamphlet, which happened after the Barcelona Conference. While Marilyn and Val were the authors, other family members (Juliet, Mathew and Jamie) were involved in the final production.

Marilyn and Val continued their co-leadership establishing a Facebook page, setting and achieving goals, but most importantly by providing much needed social and emotional support to newly diagnosed Alpha-1 patients and their families. Letting them know that they are not alone, answering their questions in terms that could be easily understood and putting them in contact with other Alphas for mutual support are just some the valuable works of the Alpha-1 Association New Zealand. 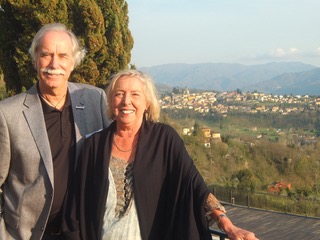 Congress in Italy; we were proud of our achievements of the past two years and looking forward to meeting old friends, setting new goals and achieving greater things. Val was not at her best and took a low key role at the Congress. I was there to support Val whilst Marilyn took the lead in representing New Zealand. The importance of these international meetings in sharing ideas and making global friendships cannot be stressed enough. It is time for a cure!

(Pictured above:Val and Jim at the Alpha-1 Global Congress in Barga, Italy)

Before telling my Alpha-1 story, I must mention that behind every Alpha-1 leader are some very special people that have supported and helped us. The New Zealand Alpha group spreads across the Tasman – the sea separates us from Australia and Steven Knowles and Jenni and Bill Nankervis. At home and most importantly are our partners, our family: David for Marilyn and I for Val.

A little bit about myself. I taught Life and Environmental Sciences for 43 years up to and including university level. My students included those with learning disabilities, the deaf community, nursing, midwifery, sports science, and health students. I am passionate about my students’ learning and explaining science in every day terms. I have used this to our advantage by helping Alphas in the New Zealand group better understand the science behind the disorder. Many in the medical profession still fail at this.

Why am I involved with Alpha-1? How could I not be? Alpha-1 has greatly impacted my life and particularly in recent years. We first found out about the disorder nearly 20 years ago when Val’s brother Phil was diagnosed as ZZ in UK. This led to Val being tested and diagnosed also as ZZ; we now had an answer for Val’s ‘asthma’ and other health issues. Val, like Phil, was only lung affected. Alpha-1 has not stopped Val having a very successful life as a scientist going on field trips (including 6 weeks in Antarctica), as a science manager, as my partner and as a Mum of three very active MZ boys now aged 32, 30 and 28 years. Knowing about Alpha-1 has given them life choices, knowledge and an understanding of what may happen with their future health. It has also robbed them of a mother they love dearly.

Sadly, Val’s brother Phil passed away in June 2016 after complications from a much awaited and successful lung transplant. Many of you will know that Val unexpectedly passed away as a result of a pulmonary hemorrhage on the 10th October 2016 after a series of antibiotic resistant infections. After being together for over 40 years, the loss of Val is devastating. Additionally, another brother in law, John, was also diagnosed with Alpha-1 in 2014. I am certain that Alpha-1 was partly to blame for his lack of energy along with a later diagnosis of pancreatic cancer which resulted in his death in February 2015. 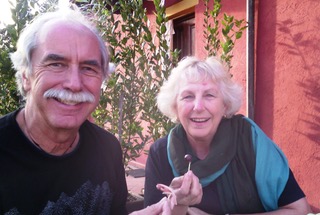 (Pictured: Jim and Marilyn on our post-Italy Congress tour)

I have been asked to say what my personal resolve is. That is easy. With co-leader Marilyn (and our families) we will continue to support New Zealand Alphas and in particular the families of baby Alphas, be an active part of the global Alpha-1 community, encourage all Alphas to live by Val’s mantra of “Life is not a dress rehearsal”, and continue to inspire Alphas to get out there and live your dreams as best you can.

P.S. A little after thought and perhaps a dream you may have. We are a global community and if any of you realize the dream and make the journey to New Zealand, the most beautiful country in the world, please get in touch so we can meet up!