In anticipation of the 2022 European Alpha-1 Awareness Day on Monday, 25 April 2022, Alpha-1 Global hosted the Improving Care for Alpha-1 Patients webinar. This marks the 5th year that Alpha-1 Global has hosted an event to commemorate Awareness Day. In lieu of the traditional in-person roundtable event that has been held in Brussels in previous years, this marks the third year that a fully virtually event was held. Members of European Parliament (MEP) Isabel Wiseler-Lima of Luxembourg and Marisa Matias of Portugal returned as co-hosts of the webinar.

The meeting was attended by various global Alpha-1 stakeholders, including patients, healthcare providers, government officials, and industry representatives. MEPs Wiseler-Lima and Matias formally began the event by greeting the Alpha-1 community and attendees and recognizing the need for increased measures to be taken to improve the conditions of Alpha-1 patients living in Europe.

Scott Santarella, President & CEO of the Alpha-1 Foundation, presented on Alpha-1 Global, the Foundation’s global program founded in 2014, and the activities addressing the strategic objectives outlined by the mission of the program. Alpha-1 Global’s key strategic focuses include facilitating effective stakeholder collaboration, raising Alpha-1 awareness globally, supporting the launch and strengthening of Alpha-1 organizations, and promoting early diagnosis and optimal access to care. Mr. Santarella outlined several ways in which Alpha-1 Global addresses each focus area. He also reviewed the available resources on the Alpha-1 Global website, including the Alpha-1 Advocacy Pathway, and educational materials are translated into several languages.

Professor Gerry McElvaney, Professor of Medicine at the Royal College of Surgeons in Ireland provided an introductory presentation on Alpha-1 Antitrypsin Deficiency (Alpha-1) and its characteristics. His presentation overviewed the fundamentals of both Alpha-1 lung and liver disease, testing, and treatments, as well as data collected from Alpha-1 patients in Ireland, including a study done on Alphas with the MZ and SZ phenotypes. 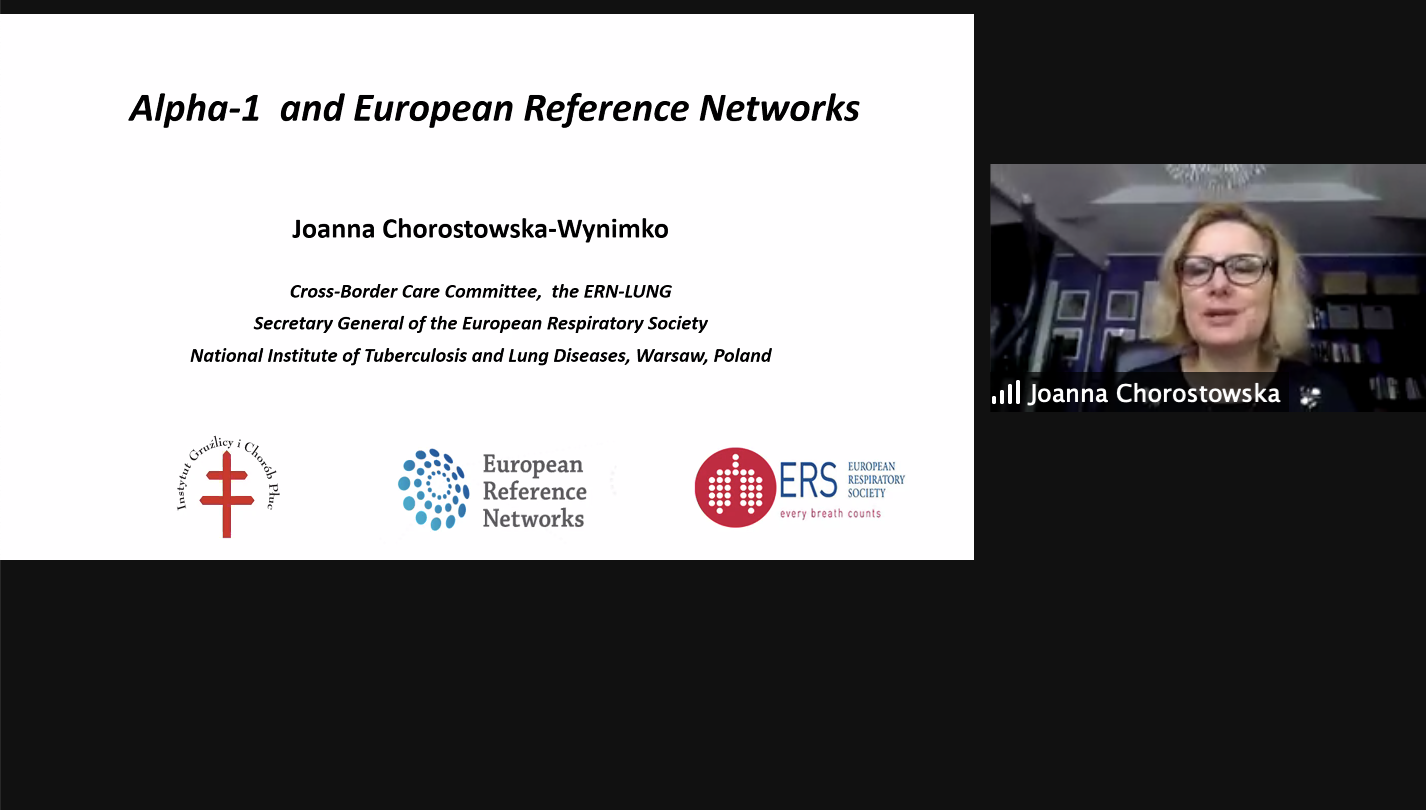 Professor Joanna Chorostowska-Wynimko, Cross-Border Care Committee of ERN-Lung and Secretary General of the European Respiratory Society, followed Professor McElvaney’s introduction to Alpha-1. Professor Chorostowska emphasized the aims identified in 2017 by the  Alpha-1 Expert Group Recommendations. Recommendations were made for the Member States of the European Union to develop an Alpha-1 diagnosis programme in their rare disease plans, and for the European Commission to develop a project to generate minimum credentials for Alpha-1 centres of excellence. This was partially achieved by the formation of the European Reference Networks (ERNs), a network of specialized healthcare centers that focus on various rare diseases, including Alpha-1. Professor Chorostowska went on to provide an overview of the ERNS and some of the challenges they face, including better representation of European diversity in healthcare delivery to diagnosed and undiagnosed Alpha-1 patients.

The final presentation of the virtual event focused on the successes and challenges of patient advocacy, featuring Dr. Frank Willersinn and Fernanda Aspilche Ferro of Alpha-1 Plus Belgium. They answered a series of questions about their recent advocacy experiences. Fernanda and Dr. Willersinn are currently in the process of engaging with Belgian policymakers to obtain reimbursement for augmentation therapy in Belgium. During the presentation, Dr. Willersinn highlighted the disparity of access to care in varying European countries and made comparisons to countries like France and Germany that already have access to augmentation therapy. Fernanda and Frank emphasized the need for awareness about the low percentage of Alpha-1 diagnoses, preventing patients from taking preventative measures for their health, and a lack of a multidisciplinary approach to study the disease and its impact on patients’ health.

Following the presentation by Alpha-1 Plus Belgium, the floor was opened for questions from attendees. The audience asked several questions to the presenters, enabling an exchange between experts in the field and the Alpha-1 stakeholders in attendance. 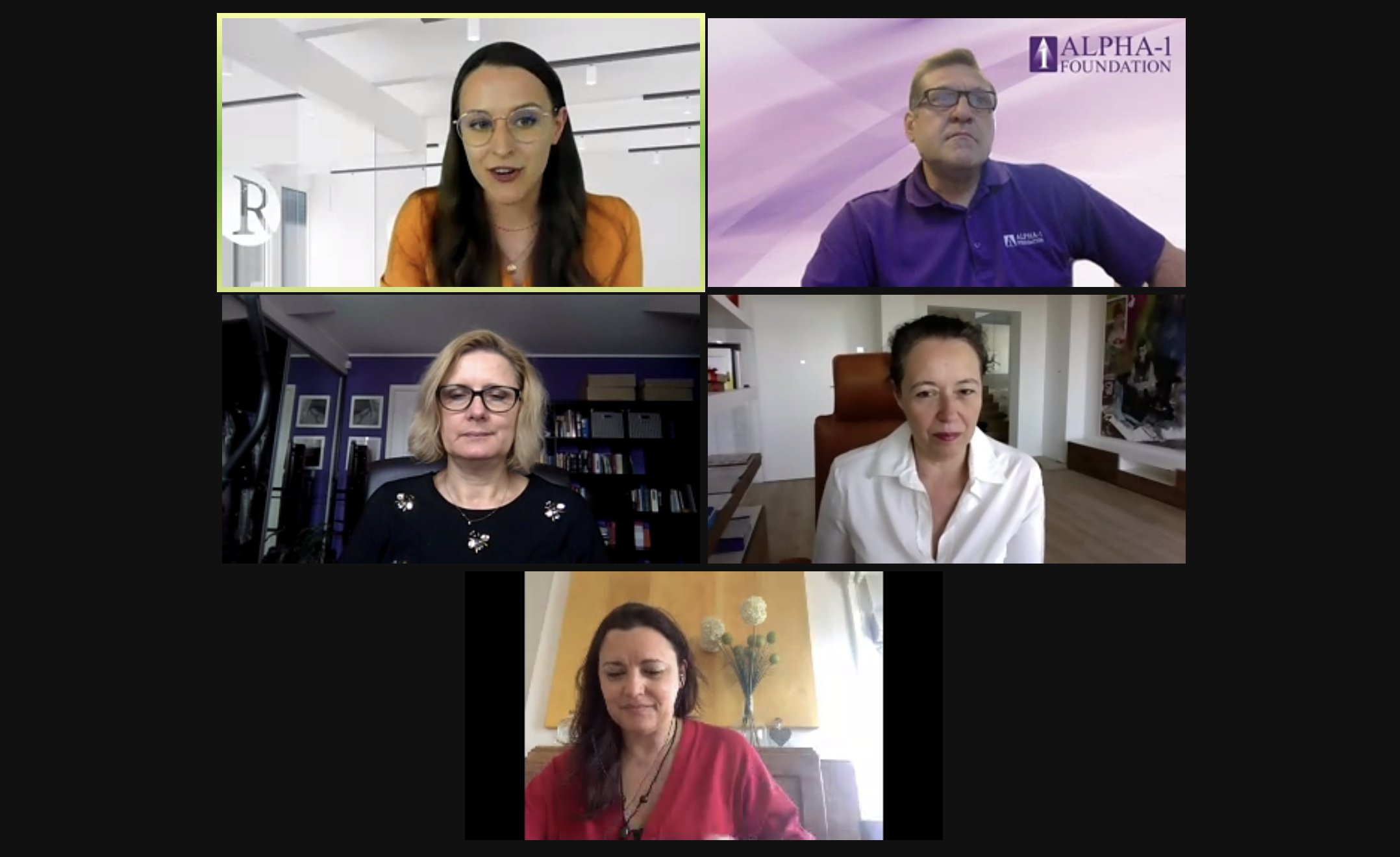 The session ended with closing remarks from MEP Matias, as she thanked the Alpha-1 community for continuing to raise awareness and informing policymakers of the need for improvements on the European and national levels.

The virtual event was recorded and is available to be viewed in its entirety here.