Groundbreaking research shows that CRISPR-Cas9 genome editing technology can correct the gene mutation responsible for Alpha-1 Antitrypsin Deficiency (Alpha-1), by successfully making a targeted gene correction in the livers of affected mice that restored at least low levels of normal Alpha-1 protein. However, some call for further research and trials to resolve the doubts that have risen.

In the studies, both published in Human Gene Therapy,  two groups of researchers used somewhat different approaches to achieve these historic results in mouse models of Alpha-1, and discuss why their findings are so important for the future treatment of patients with Alpha-1.

The publication entitled In vivo Genome Editing Partially Restores Alpha1-Antitrypsin in a Murine Model of AAT Deficiency was coauthored by Terence Flotte and Wen Xue, both from the University of Massachusetts Medical School (Worcester), together with a team of researchers from UMass Medical School, Tongji University (Shanghai, China), and Wuhan University (China).

The researchers co-injected two adeno-associated viral (AAV) vectors: one to deliver the Cas9 component of the CRISPR-Cas9 system, and the second encoding an AAT gene-targeted guide RNA and carrying a homology-dependent repair template.

But, even though CRISPR-Cas9 has taken the life sciences field by storm, making gene editing simpler and faster than ever, caution is being called upon in several fronts.

CRISPR-Cas9 gene editing was only first described in 2012, barely six years ago, and the first human trials using CRISPR as a therapy were started in China in 2017, while Europe is due to run the first one later in 2018 by CRISPR Therapeutics in Switzerland. For some, it seems like some scientists might have rushed into it too soon, as a new study points out that therapies using this popular gene editing tool could inadvertently cause cancer.

The research, published in Nature Medicine, describes that the use of CRISPR-Cas9 in human cells can activate the protein p53. This protein is involved in the repair of DNA breaks and can interfere with the efficiency of CRISPR to cut DNA.

The study is not good news for CRISPR Therapeutics, the Swiss company that intends to start the first CRISPR trial in humans in Europe later this year. Its application is currently under review by the European Medicines Agency (EMA), which might choose to request more data regarding the risk of inducing cancer before greenlighting the clinical trial. In late June, Federal Drug Administration (FDA) in the US put a hold on its US CRISPR trial requesting more information, which resulted in a big stock drop for CRISPR Therapeutics.

However, the results are not yet definite.

“Our results were obtained in a certain cell type that is currently not used in clinical trials. Thus, it needs to be firmly established that the mechanism operates also in the cell types that are actually used,” says Bernhard Schmierer, researcher at Karolinska Institutet and one of the authors of the study.

Last year, a study showing that CRISPR-Cas9 resulted in off-target genetic modifications made companies in the space take a big hit. However, several months later, Nature retracted the paper after multiple researchers pointed out faults in the research. While the authors of the current study concede that their results need to be confirmed, they urge caution regarding the possibility of increasing the risk of cancer with CRISPR therapy.

This is a milestone that raises hopes for success in the commitment of the Alpha-1 Foundation (A1F) of finding a cure for Alpha-1 Antitrypsin Deficiency and improving the lives of people affected by Alpha-1 worldwide, but it must be studied further, and more research and trials should be carried out before the scientific and the Alpha-1 community can embrace this therapy as an alternate road towards a cure. 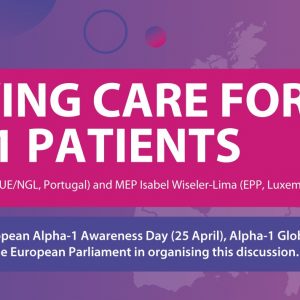